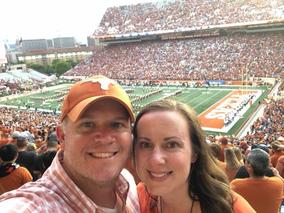 Following Harpers diagnosis, at the suggestion of their geneticist, work began to find a genetic researcher to take her case. Countless emails were subsequently sent. To our surprise a researcher at Cleveland Clinic took the case. The non-profit Harpers Quest was formed shortly there after by Megan and her husband Michael. Harpers Quest has been the main source of fundraising for SOX5 research to date. Since then, the Lamb-Shaffer research has moved to CHOP in Philadelphia.

Megan is a practicing Nurse Practitioner in OB Triage in Austin, Texas. She also works with the University of Texas OB residency program, teaching the doctors of the future.  Medicine is in her blood, but she never imagine how immersed she would be with the medical care andspearheading of research for one of her own children. However, her education has been beneficial on her quest to share Lamb-Shaffer Syndrome awareness, as well as supporting special needs families.

Inherfreetime Megan enjoys spending time with her family, traveling and spending time at the baseball field watching her son play.