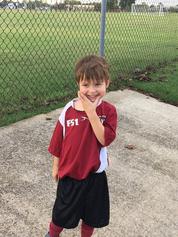 To help Ivan and his family learn more about the SOX5 gene please click the link below. Any size donation helps with funding our genetic research. 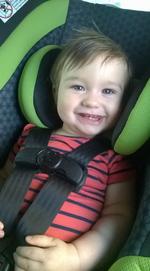 Hey there! Our names are Justin and Faith Dunning and we wanted to share our story about our adorable, nearly 5-year-old son, Ivan. Pregnancy with Ivan was pretty normal. He grew on the right timeline and we had no concerns. We had a couple of 3D/4D ultrasounds done and in hindsight, the only oddity was that one time the ultrasound tech asked us where our son got his nose from and we didn’t really know. His paternal grandmother felt that it came from her side of the family, so we accepted that and moved on. Turns out LSS can give our babies this nose shape, too! Ivan’s birth was also pretty normal. We had an elective induction because we were a military family at the time and wanted our extended family to be able to be there for the birth of the first grandchild. Ivan was a cute, clingy newborn that seemed to be sensitive to all of the fluorescent hospital lights. He couldn’t really tolerate lying in the bassinet for any amount of time and always wanted to be held. We were happy to comply. He gained weight quickly and was a champ at nursing.

In the early months, he did seem to struggle with painful gas and it would make him cry hard when it happened. He had a precious smile and gave us enough back and forth interaction that we still had no concerns. Around 6 months, his maternal grandmother expressed concerns about his development because we had to put forth a lot of effort to get him to laugh. At the time, we dismissed the concern. Ivan was able to sit up by himself around this time and would occasionally eat puree from a spoon or Faith’s hand, but breast milk was most definitely his preferred food of choice. He didn’t really attempt to grab spoons and bring them to his mouth. He also very rarely picked up things off of the floor and attempted to eat them. He was a very easy baby in that way. As long as he could nurse and be held, he was happy.

At Ivan’s 8 month check-up, his pediatrician said that his development was delayed and referred us to a state funded Early Intervention program. Ivan wasn’t really babbling at the time. He did a lot of the “normally developing” behaviors, just not as often as other children. We went to the first appointment and they told us that he was at risk for autism because he did a lot more observing his surroundings than interacting with them. We ended up rejecting the idea and didn’t pursue therapy again for 7 more months, believing he just needed more time. Justin had a fresh cancer diagnosis when Ivan was 8 months and truthfully we were just trying to get through it.
Ivan crawled at 13 months and walked at 18 months. He also did not start to finger feed until 18 months. He wasn’t interested in solid food, he just nursed often. It was like having a newborn for almost 3 years with how much he relied on nursing to sustain himself. The first and only time we tried formula, he vomited all over himself. Any solid food he ate had to be handfed and bitten into small pieces. It sounds extreme as I’m typing it, but it was our normal at the time. After he turned 1, we started giving Ivan a multivitamin with iron to try to compensate for how few foods he was willing to eat as well as his small portion sizes.
Fortunately for us, we had Tricare, so we were able to take advantage of public and private speech and occupational therapy starting when Ivan was 1.5. Ivan has always been extremely cautious and was very afraid of any objects that might move beneath him. i.e. slides, bikes, and trampolines. He truly struggled with that between ages 1-4. Nowadays, he’s getting a lot more courageous and can conquer those fears within 5 attempts. He doesn’t deal well with pressure, though. You essentially have to say “You’ve got

this, buddy!” and walk away before he will try to do something new. It definitely felt like therapy wasn’t helping Ivan. It seemed like any small progress that was made was because of time passing and not necessarily the therapy. Ivan started preschool at 2.5 and made more progress in a few months than the year and a half of therapy. He does seem to be peer motivated. He’s got a sweet demeanor and has friends.
Throughout this time, no one really had a reason for Ivan’s developmental delays. People felt he was too social for autism, though he does portray many autistic characteristics. We were on a year waiting list for4 hour autism testing. At this time, Ivan was almost 3. Once the appointment came, we were prepared to accept the autism diagnosis, but they didn’t give us one. We left with a diagnosis for “Developmental Delays” and “Expressive/Receptive Language Disorder”. They told us to move forward with all of the same therapies and communication devices that you would choose for someone on the spectrum.
Once the military enlistment was finished, we moved back to our hometown and enrolled Ivan in a private preschool that uses neuro-typical peers to help foster social, physical, and academic progress in children with disabilities. His current classroom is phenomenal! We did end up receiving an autism diagnosis through the school. Little did we know that Lamb-Shaffer Syndrome is the cause! When Ivan was 3.5, Faith was Googling “Developmental Delays” one day and stumbled upon a website that hadn’t been updated in 2-3 years. It was a Hudson Alpha study whose purpose was to find the genetic causes of developmental delays in children with no known cause. Faith called the number on the website 3 times over 2 weeks and eventually reached a kind nurse who thought she may know who was leading the study and got Faith in touch with them.
Once we gave them all of the medical documents proving that Ivan had developmental delays and no known medical causes, we were given a date to show up and have blood taken from the three of us. Later we would learn that this called a Whole Exome Sequencing (WES) test. We knew nothing about genetic testing at the time and were essentially shooting in the dark because any knowledge was better than the grey, shadowy unknown it felt like we were living in. After 5 months, we were called and given an appointment time to speak with a genetic counselor about the results. We truly believed that nothing would come of this. We had read that only 35% of people get a result and we didn’t think that would be us.

On May 31, 2018, the genetic counselor came into the room and told us that there was good news. They had found something. They gave us a print out about Lamb-Shaffer Syndrome and on the front of it was a sticky note that said “SOX5 Lamb-Shaffer Syndrome Facebook Group”. Then the genetic counselor left us in the room to talk about it amongst ourselves. It was an extremely overwhelming time and we mostly just cried while filling out the Hudson Alpha questionnaire about our feelings. It was surreal because there was this term “Lamb-Shaffer Syndrome”, something we had never even heard of, and now it was going to be this huge part of our lives. At the time we weren’t sure if finding out was a good or a bad thing. Receiving a genetic diagnosis sort of paves the way of the future so it forces your expectations to change. However, now we are incredibly grateful and we feel very lucky that we got the opportunity to be a part of the study. Ivan’s making great strides in his own timeline and he’s only getting cuter and cuter by the day. We love getting to spend our time with him and it’s been great to share in his unique interests. He’s made us better people, no doubt about that. We appreciate our family every day and look forward to what the future holds.