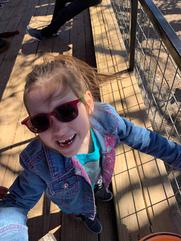 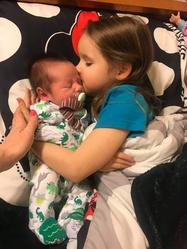 My name is Sara Van De Water, and I am the mother of two children, Addison is 7 and a half, and Trevor just turned one. Addison was diagnosed with Lamb Shaffer Syndrome in February of 2017 at 5 years old. My pregnancy was completely normal, as was Addison’s newborn time. The first sign that something was ‘different’ was actually completely missed by us. Addison was born with the most adorable dimple on the tip of her nose, and her Dad and I just thought it was a cute, random feature. We would later learn that this was due to the SOX5 gene’s effect on cartilage formation. The next subtle sign was that as a baby, Addison was nearly silent, unless she was crying. There was no baby babble or cooing, but as a new, first-time mom, I missed this sign. The next sign came as Addison began to miss mobility milestones. She didn’t crawl, and I remember people telling me, ‘its fine, lots of babies don’t crawl’. Then it turned to her not pulling up on things, not standing, then eventually not walking. She didn’t take her first step until she was almost 20 months old. Around this same age, I became very worried about her speech. She had muttered a few words, but then she stopped talking completely. This was when my alarm bells were out-ringing all of those around me that had been telling me ‘everything is fine’. I knew everything was not fine, and I wanted answers.

My first stop was our pediatrician. They had beencautiouslyfollowingAddison, and knew we had some concerns. They referred us to a neurologist, which was of course a 6 month waiting period to be seen. When we finally saw the neurologist, a red flag was set off for him when I stated that she had previously spoken some words, but then stopped. This prompted a 1 hour awake/asleep EEG to monitor her brain activity. I remember like it was yesterday, getting the call less than an hour after that stating that there were abnormal findings, and we would need to go to the hospital to do inpatient EEG monitoring. Up to this point, a small part of me thought, maybe all of this is just in my head, and there isn’t anything wrong with her after all. The inpatient EEG showed that while Addison slept, she had epileptiform discharges. These never occurred while she was awake, only asleep. Her neurologist decided we should treat the seizure activity, and see if it helped her development. After about 6 months and trying two different seizure medications, it was clear the benefits did not outweigh the risks. Addison was losing her hair and her teeth were decaying from the medications. Additionally, we hadn’t seen any significant improvement in her development.

During this period, we also found out that Addison had some vision problems, and took her to an ophthalmologist. It was discovered that Addison had astigmatism, as well as optic nerve atrophy. They prescribed her glasses, and kind of scratched their heads about the optic nerve issues, as there was nothing to explain this.

At this point, we regrouped with neurology. Her epilepsy wasn’t the answer, so we decided to evaluate for autism, which had originally been ruled out just based on her behavior and interaction during our appointments. The doctor performed the evaluation, and it confirmed that she didn’t quite meet for autism, but he made us an offer. He could go ahead and diagnose as autism so that we could get her the therapy that she obviously needed, or we could keep pushing for answers. Her Dad and I decided we weren’t ready to give up, and we asked to keep pushing.

Next, we started our journey into Genetics.In the beginning of our neurology time, we had done a Chromosomal Microarray, and that had been normal, so I was skeptical we would get answers, but what the heck, right? We had to travel 3 hours away to get in with a geneticist, as the one in our area had a year long waiting list. Our first visit was a consultation, with a lot of review and talking. From there, he decided to order a round of labs, and if those were normal, he would order what is called Whole Exome

Gene Sequencing. The first round came back normal, so we moved on. The Whole Exome testing requires both parents and the child get their blood drawn, and let me tell you, my husband was not too thrilled (strange needle phobia), but of course he complied. This testing took almost three months to complete, and then one day I got the call. The geneticist wanted to see us in person to discuss the results. Now seeing as we lived 3 hours away, I asked if we could talk over the phone. When they told me no, I knew we finally had our answer. We waited 2 weeksforthatappointment, and then drove the 3 excruciating hours. The first question the doctor asked us was if Addison had ever had an optic nerve issues. When we told him she had been diagnosed with atrophy, he stated that it all made sense to him. Addison had a “Variant of Unknown Pathogenicity” on her SOX5 gene. Basically, this same gene has been associated with people expressing similar symptoms, but there were so few cases that they didn’t have an official syndrome to associate it with at that time. The other cases had basically all of the same symptoms, including the optic nerve atrophy. I walked out of the appointment with a strange sense of peace. We finally knew what we were facing.

Then set in the urge to research and find out as much as humanly possible. See, the geneticist gave us a diagnosis, but they knew nothing about the condition, much less what to tell us to do next. I spent the new few weeks looking around on the internet, signing up on rare genetic groups, and never found another person with a SOX5 disorder. I finally resigned to the fact we may not find anyone. Then, a few months later, I had the urge to search Facebook again. This time, I found this group of parents that all had children with SOX5 gene disorders, and I reached out to the them. I was contacted back almost immediately, and my life has never been the same since. Not only was there a network of around 20 families (at that time), but two other kids lived right here in the Austin, TX area! While our journey to find answers was long and difficult, I am so glad that it has brought us where we are today. I have a beautiful, talented, opinionated daughter that lights up our world every single day. We don’t know what the future brings for her, but we work every day to try to give her all of the opportunities that we can. Most of all, she is loved beyond words, and she can brighten up the darkest of moods with her smile and a hug.

Do you want to help Addison and her friends learn about their special syndrome? If so, please click the link below help fund the research of the SOX5 gene.

To help Addison and her family learn more about the SOX5 gene please click the link below. Any size donation helps with funding our genetic research.